RENO, Nevada (Oct. 10, 2022) – Hot August Nights has new leadership at the helm with the appointment of Deny Dotson as the Executive Director responsible for the organization’s region-wide economic infusion of more than $81 million annually. Dotson previously served as Tourism Director for Virginia City, a position he held for more than 10 years.

Dotson led the reorganization of the tourism authority to a fair and recreation board and thereby established a new way to market the town under the Virginia City Tourism Commission. During his tenure, he increased the operating budget fourfold. This was accomplished through efforts focused on driving visitation through events and marketing campaigns, including the Below the Surface video series and the pandemic-developed “Everyone Is A Local” program focused on recovery efforts. He led the acquisition, development and management of the Virginia City Arena & Fairgrounds, the host location for the annual International Camel & Ostrich Races and large venue for other events, developed of the town’s branded Cemetery Gin spirit, secured the agreement with Hot August Nights as the official kickoff location, brought the return of Street Vibrations Fall Rally to the town and developed, grew and provided event oversight of all Virginia City special events.

“I feel humbled to walk in the footsteps of those that have led Hot August Nights before me,” said Dotson. “The charge of leading the team of dedicated staff, passionate volunteers, partners and sponsors for the largest classic car show in the world is one, I feel, I’ve been preparing for. It’s a responsibility I don’t take lightly. I’m appreciative of the trust of the Board of Directors and now, it’s time to roll.”

Hot August Nights, a nonprofit organization, is the world’s premier classic car event, annually drawing hundreds of thousands of spectators and participants to northern Nevada to revel in nostalgia, enjoy top entertainers from the 50s, 60s and 70s and participate in a variety of events including Show-n-Shines, controlled cruises, an auction, drag races and more. 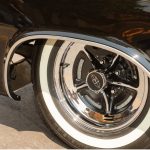